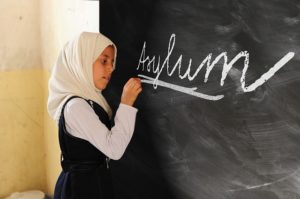 It is a sad fact that many atrocities happen in this world. In some countries, these horrible situations have simply become a way of life. There are people who refuse to suffer through these conditions and choose to flee their home countries and ask for asylum from the American government.

Non-citizens who face persecution in their country of origin and seek asylum in the United States can count on US immigration law to have provisions for their predicament. They may be awarded either asylum status or refugee status. Both provide legal status to beleaguered immigrants.

How is one distinct from the other? The difference lies in the location of the asylum seeker. Asylum seekers who are already physically present within the United States border get an asylum grant, while those who are still outside are regarded as refugees. Border patrol along the southern border often deals with asylum seekers from Central America. The Mexican border is usually the port of entry for caravans of Central Americans seeking asylum from persecution and violence in their homeland.

Eligibility for Asylum or Refugee Status

What must an asylum applicant do to legally stay in the United States? According to American asylum law, if you want to qualify for US asylum, you must prove that:

After a year of the grant of asylum, those with asylum or refugee status may apply for a green card and become lawful permanent residents. Application for permanent residence must be filed by refugees within a year of entering the United States. Application for asylum must be filed by qualifying immigrants within a year of their last entry into the US. Failure to comply with the time requirement without extenuating circumstances will result in denial.

In relation to refugee law, persecution can include the following:

How do you prove its past occurrence or potential future occurrence? Even the fear of future persecution must be well-founded on a real threat, and not mere speculation. You can provide medical records, affidavits, organizational membership documentation, news reports, and even personal statements as evidence. You can talk to an immigration lawyer for help in providing proof. The US Department of State itself also releases reports on human rights issues in countries all over the world.

There are non-citizens who are barred from asylum applications despite proof of their persecution. An American immigration attorney can better identify who may not request asylum, but, generally, they are:

Undocumented foreign nationals already in the country may talk to immigration lawyers about becoming an asylee to correct their immigration status. Illegal immigration comes with unfortunate consequences. Nobody wants to be on the bad side of the Department of Homeland Security and other citizenship and immigration authorities, so it’s important to pursue legal status as soon as possible. Being illegal aliens, they are likely to require legal representation when navigating the asylum process and dealing with the immigration system to avoid facing the removal process of deportation.

Immigration laws do provide for immigrant rights. One of these is the option to claim asylum if qualified. If you fear persecution in your country of nationality and are eligible for asylum or have a loved one who may qualify as a refugee, consult an immigration lawyer right away. Call us at Diener Law and speak with an experienced asylum lawyer.