Applying for Citizenship and Your Green Card: What You Need to Know

Any immigration process requires precision and patience. Getting visas and immigrating to the United States are no simple tasks. Even more, so is becoming a lawful permanent resident. A foreign national who qualifies (following relevant immigration law) must first undergo a tedious process to get a green card. A green card application will not only take time but will also involve several forms and supporting documents.

While the specifics of the green card process is important, it helps to start by clarifying what it means to successfully obtain a permanent resident card. A US green card is issued by the US Citizenship and Immigration Services (USCIS) and is, in simplest terms, proof of an individual’s permanent resident status.

Given the various USCIS forms and paperwork involved, applying for a green card can be very stressful. Hence, an immigrant getting a green card would benefit from seeking legal help from an immigration attorney. The latter can assist in submitting forms and supporting documents to the relevant government agency.

There are several benefits to being a legal permanent resident of the country, which could be in terms of employment or exclusive privileges. These benefits are often the main reason why an alien would exert effort to meet the requirements and eventually become a green cardholder.

Applying for permanent residency is not easy, yet people take the extra mile and seek help from an expert on immigration services. Why is this so? Because on top of the benefits mentioned above, a successful green card application is essentially a step closer to American citizenship. 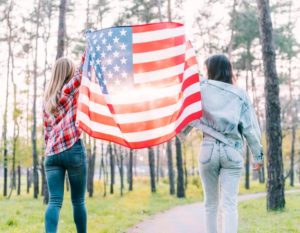 Long processing times and a complicated immigration process are just some of the many discouraging things associated with becoming a citizen of the United States. A foreign national, if eligible for citizenship, must fill out several immigration forms and submit necessary supporting documents to the USCIS. It is undeniable that a United States citizenship is not easy to acquire. However, countless people still apply to gain citizenship due to certain rights and responsibilities reserved for a United States citizen.

Once an individual of a different nationality can obtain US citizenship, he or she gets actual permanent residency and is allowed to vote in federal and state elections. (Note that a green card holder does not have a right to vote). An immigrant who became a citizen could travel and reside abroad with little restrictions, and his or her citizenship papers would be useful for immigrant visas of relatives wanting to immigrate and get a green card of their own. (Under relevant family immigration laws, petitioning with only a permanent resident card is more limited and can take longer).

Generally, an individual of good moral character who is at least 18 years old and is willing to take an oath of allegiance and state belief in the principles of the Constitution may be able to qualify and become a citizen in the United States.

Depending on your immigration status, such will play a crucial role.

Aspiring US citizens must have, as a minimum, five years of lawful permanent residence before the application for citizenship. According to immigration law, this period will only be shorter (reduced three years) if a foreigner proceeding with the application is a spouse of a US citizen.

If your legal permanent resident card will expire within six months or is already expired, renew it before your citizenship application. Make sure to process your green card renewal with the USCIS before you apply for citizenship.

Note that one can apply for naturalization even before the new green card is mailed. However, a clear photocopy of the receipt for the Application to Replace Permanent Resident Card (USCIS Form I-90) must be submitted when the card is received.

Becoming citizens of the United States is extremely advantageous in several circumstances, but be aware that obtaining citizenship is indeed a lot more difficult than it looks. When applying for citizenship status, the United States government will closely review your file. The risk here is not only getting a denial but also getting deported. In some instances, grounds for deportation are found and, instead of gaining citizenship, the petitioner is deported to his or her home country.

For assistance in submitting your green card application or for any questions on citizenship requirements or the citizenship process, talk to us at Diener Law and consult with a hands-on immigration attorney.