Every day, you’ll find thousands of people who fled persecution in their home countries, asking for asylum at the United States’ southern border. The majority of them hail from Central America and they’re willing to wait for months until they can plead their case before American immigration authorities. With the latest US Supreme Court order, however, very few of them are now eligible for asylum.

The Supreme Court recently allowed the administration to implement new rules that deny applications for asylum in the United States from those who haven’t already been refused asylum in any of the countries that they passed through on their journey to get to a United States border. 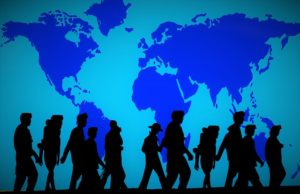 This latest stipulation is one of the most drastic measures the current government has taken in its efforts to minimize the volume of immigration, upending the accepted norms of asylum and humanitarianism. It is expected to impact a large number of asylum seekers hoping to live in the US. There are hundreds of thousands of individuals who seek asylum going through Mexico to get to the United States, including Eritreans and Cameroonians who are escaping political turmoil in their countries of nationality as well as Venezuelans and Nicaraguans who are escaping repression in theirs. They now face harder access to asylum. Prior to this Supreme Court decision, US immigration officials reported that nine out of 10 claims for asylum were already being denied.

Thus far in the 2019 fiscal year, the US Border Patrol has already intercepted over 800,000 migrants, including asylum seekers at the US-Mexico border. In the past few months, the administration has turned tens of thousands of migrants, most of them Central American, back to Mexico to wait for their immigration hearings and see if the US will grant asylum to them. This is in compliance with Migrant Protection Protocols, also called the “Remain in Mexico” program.

Ken Cuccinelli, Acting Director of the US Citizenship and Immigration Services (USCIS), expressed his praise of the Supreme Court’s decision to allow the implementation of the new asylum rule to require asylum seekers to first request asylum from at least one safe third country they had to go through on their way to the US.

Cuccinelli stated that the choice to strike down the injunction of judicial activists is supportive of the administration’s campaign to improve the asylum process. He said that the new rule for asylum seekers is designed to protect the US asylum system’s integrity as well as ensure that seekers ask for asylum from the first safe nation that they reach.

For too many years, loopholes in asylum policy have been taken advantage of by various organized criminal networks such as drug cartels and human traffickers as those seeking a better life and family reunification make their way across the US-Mexican border. Cuccinelli explained that exploitation of the US asylum procedure allows violent criminals to gain illegal cash flows, takes attention away from the legitimate asylum applicant, as well as compromises the integrity of the US immigration system.

The USCIS Acting Director pointed out that Congress’s refusal to take action compelled the administration to exercise its authority under the law to deal with the crisis at the Mexican border. He emphasized the government’s commitment to safeguard the homeland, its borders, and the legal channels for entry into the country.

If you’re a seeker and need help with your asylum claim, it’s best that you hire an experienced immigration attorney. Being an asylee will give you legal status and prevent your deportation to your home country; otherwise, you might be regarded as an undocumented alien, an immigration status that could lead to removal proceedings and your return to your country of origin. You don’t want to find yourself illegally living in the United States and hiding from the Department of Homeland Security.

For immigration issues, it’s best to have legal representation to help you navigate and stay within the boundaries of immigration laws. Whether you need guidance on an application for asylum status, visas, lawful permanent residence or green card, citizenship or naturalization, or any other immigration concern, legal counsel is invaluable.

Need assistance with immigration services? Call us at Diener Law and schedule an appointment with an experienced immigration lawyer.